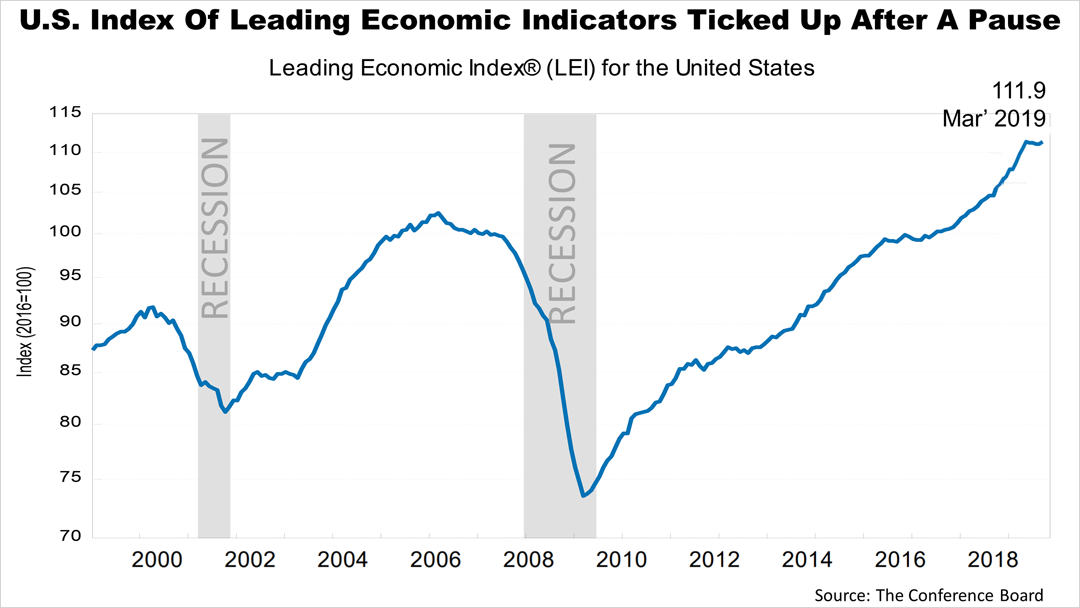 The Leading Economic Index (LEI) for the U.S. increased by four-tenths of 1% in March, following a one-tenth of 1% increase in February, and showing no change in January.


"The US LEI picked up in March with labor markets, consumers' outlook, and financial conditions making the largest contributions," said Ataman Ozyildirim, Director of Economic Research at The Conference Board, which administers the LEI. "Despite the relatively large gain in March, the trend in the US LEI continues to moderate, suggesting that growth in the US economy is likely to decelerate toward its long term potential of about 2% by year end."

This chart shows how the LEI definitively rolled over months in advance of the last two recessions, illustrating why the LEI is recognized as a reliable forward-looking indicator of a recession. As the LEI stands near a record high not reached in the two previous expansions and shows no sign of recession, the economy is growing slower than the 2018 growth spurt. 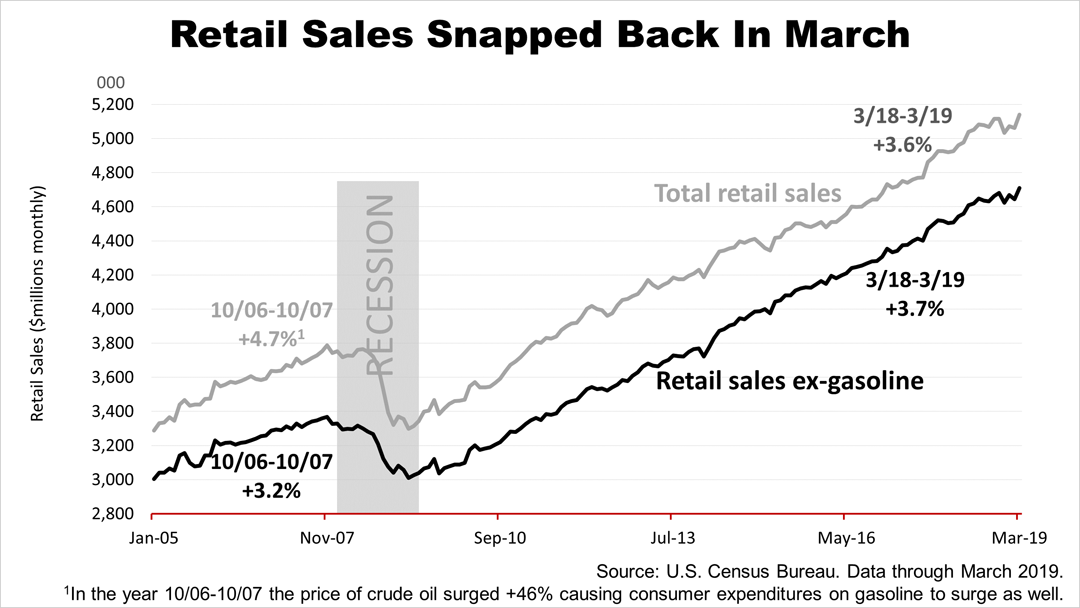 Retail sales, excluding gasoline, were up a strong +3.7% in the 12 months ended March 2019, completing a recovery from an abrupt December drop. Gasoline is excluded from retail sales because its sharp ups and downs can often distort or mask retail sales trends. The +3.7% 12-month growth rate was better than the last boom year prior to the 2008-2009 recession. Retail sales are a key fundamental in the U.S. consumer-based economy. 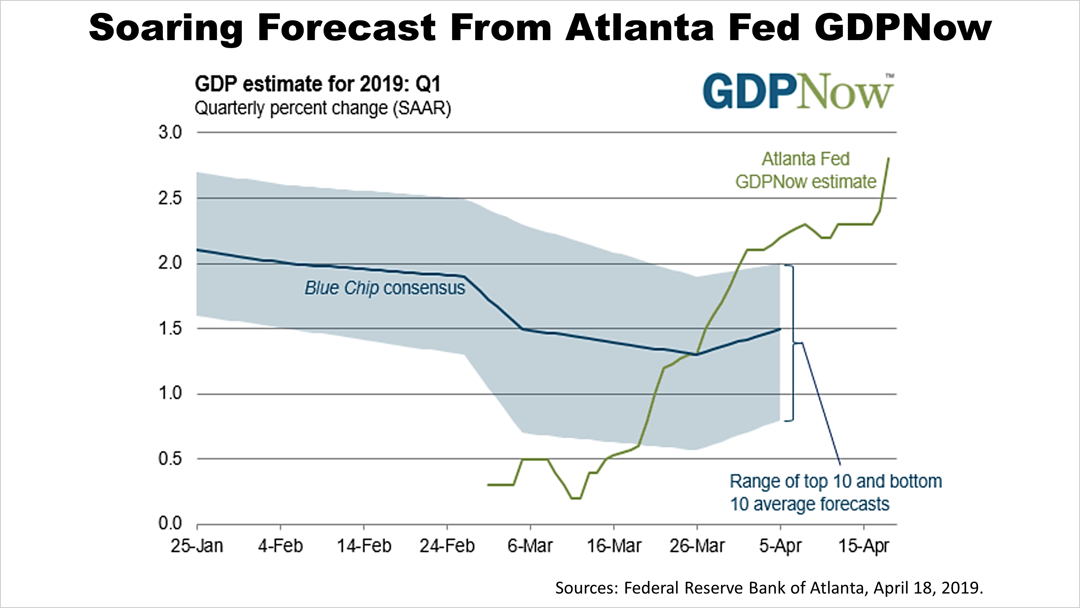 The consensus forecast of a survey of economists by Blue Chip Econometrics, last updated on April 15th, called for a first-quarter U.S. growth rate of 1.5%, but the Federal Reserve Bank of Atlanta's GDPNow forecast, which grows more accurate in the days after the end of a quarter and just before the Commerce Department announces the official GDP figure, soared on Thursday, April 18th on retail sales. On Friday, the GDPNow forecast was unchanged, calling for a first-quarter growth rate of 2.8% — nearly double the consensus of economists. A week earlier, the GDPNow forecast called for a 2.3% growth rate in the first quarter. This makes an economic surprise a real possibility. 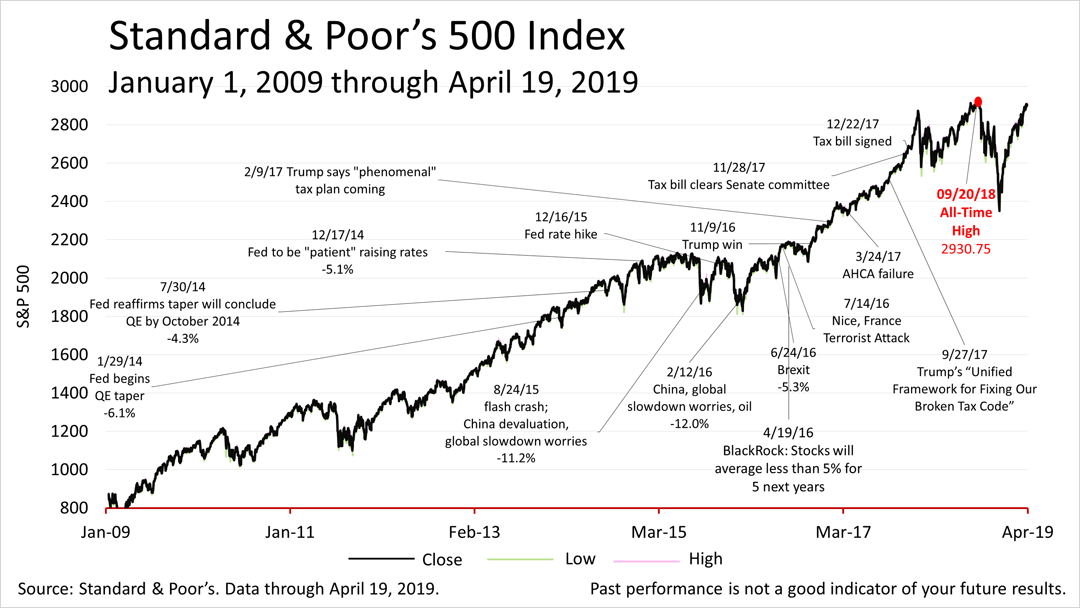 No one can predict the market's next move. Key measures of economic fundamentals, like retail sales and the LEI, remained strong as the price of the average share of the S&P 500 index settled at less than 1% off the record all-time closing high price of Sept. 20th, 2018.